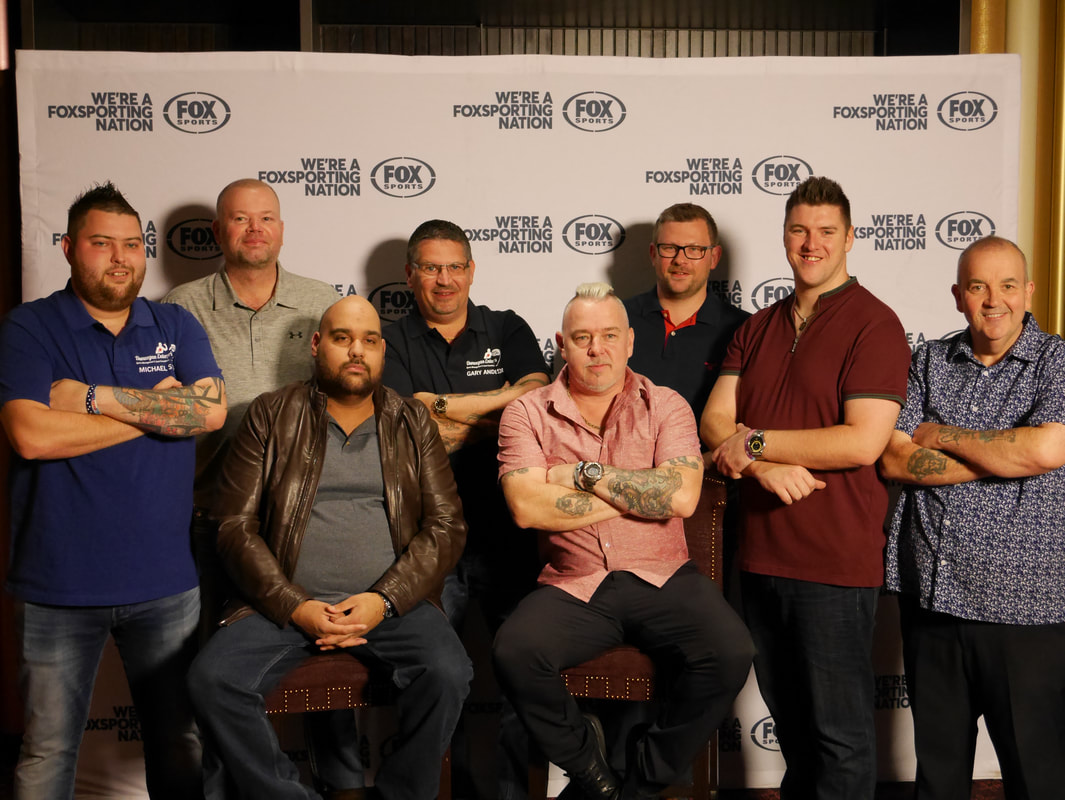 Phil Taylor v Peter Wright
They have played each other 34 times with Taylor winning on 21 occasions, 10 wins to Peter Wright and three draws. Their last match was of course the World Matchplay Final this year in Blackpool which Taylor comprehensively won 18-8.
Taylor lost to Wright in the semi-finals of the World Series of Darts finals last year in Scotland. This year Taylor does hold the head to head record with three wins in their five clashes on the big stage.

Match 1
Daryl Gurney v Peter Wright
These two last went head to head in the World Matchplay semi-final this year when Peter Wright had to use all his experience to defeat the Northern Irishman Daryl Gurney 17-15. The only time they have met in the World Series was the quarter final stage of the US Darts Masters in Las Vegas this year when Gurney defeated Wright in the last leg (the score-line ending 8-7.) In fact of the six times the two have already faced off against each other this year, that is Gurney’s only win.
Overall they have faced each other 13 times with Gurney only picking up three victories (the other two being in the 2016 PDC Dutch Darts Masters and in February 2015 in the last 16 of the UK Open qualifier. The first time these two met was in 2013.

Match 2
​Phil Taylor v Simon Whitlock
These two have played each other alot over the years, 14 times in 2012 alone, but they have not gone head to head on the big stage since the Auckland Darts Masters, the original version, in 2015! On that night it was Taylor who was victorious, 8-3 in the quarter final stage. That was their only meeting that year and of the three matches the year before, all went Taylor’s way.
The last time these two met in the semi-final stage of a World Series event was in 2013 at Luna Park at the original Sydney Darts Masters. That match also went the way of Taylor as he started his run in the World Series events on the east coast of Australia that sees him undefeated in five events up to this point of time. The final score-line that night was 10-6 to Taylor. Overall of 47 matches Taylor has won 40. Of the seven Whitlock has won the last came in April 2013 at a UK Open Qualifier.

​ Match 1
Peter Wright v Michael Smith
Wright and Smith have played each other 16 times and for Snakebite the head to head is comfortable reading as he has won 11. However the last time they played was in the semi finals at Gibraltar which Smith won to then go on and win the tournament, defeating Mensur Suljovic in the final. This year things are even with two wins apiece between the players.
In Auckland both players were defeated by Corey Cadby so will be looking to progress further in this tournament.

Match 2
James Wade v Simon Whitlock
Having played 35 times it is the Australian who holds a considerable lead in the head to head 20 – 15. The majority of the matches they have played were between 2010-2014 with only two clashes in 2015 and 2016 in total, and this their first head to head this year. In their last clash Whitlock won 6-3 at the Players Championship in October 2016.
The two have certainly gone in to battle each other in the past but this is only the second time they have met on the World Series stage, the last time being the very first event – the Dubai Masters of 2013- when Wade defeated Whitlock 10-8 in the quarter finals.

Match 3
Corey Cadby v Phil Taylor
If their clash in Auckland was about revenge for Cadby then the same can be said for Taylor this time around. Despite a misreading of the so-called antics by some of the Kiwi commentators in Auckland the two enjoy playing each other as it brings the most out of their competitive natures.
Head to head reads 2-1 to Cadby and Taylor will not want to finish his career with a player comprehensively leading him on a head to head basis. For Cadby it is another chance to demonstrate why he is the new king and, if things go a certain way, move into a semi-final against Simon Whitlock, Australia’s current number one player. Cadby will not be able to begin as slowly as he did in the first round against van Barneveld or Taylor will be too far ahead to claw back. The same can be said for Taylor though, as Cadby’s confidence will soar if he takes too big an early lead.

Match 4
Gary Anderson v Daryl Gurney
Anderson and Gurney have gone head to head 11 times on the main stage. Anderson has lost the last two at the US Darts Masters in Las Vegas, and the World Matchplay in Blackpool. In that latter match Gurney had been 3-0 before coming back to win 11-9 with a 103 average so he will be confident he can fight back from most positions. In fact the only time Anderson has beaten Gurney this year was in the pro tour in Wigan in June, with the head to head this year reading Gurney 3 wins Anderson 1 win.
Overall it is much easier reading for the two time world champion as he was won the majority (six) of their clashes over the years. Gurney’s 8-4 win in the semi finals of Las Vegas is the only time the pair have met in the World Series of Darts.

Melbourne Darts Masters 2017 Round 1 Previews (Friday Night Hisense Arena.)
Match 1
Daryl Gurney v David Marland
For Marland his debut on the masters stage caps off a very successful twelve months where he also took out his first event on the DPA circuit. Gurney comes in having won in the first round in New Zealand against Rob Modra.
It is interesting to note that Marland actually defeated Modra two weeks before in the final at Warilla Bowls and Recreation Club to qualify for the Melbourne Darts Masters. Gurney lost against Wade and will be looking to progress further in Auckland, just as he did on his World Series debut in Las Vegas. If Marland were to defeat Gurney it would be the first time the Super Chin will have been knocked out in the opening stage of World Series events.

Match 2
Peter Wright v Rhys Mathewson.
Snakebite v the Muff. Mathewson famously defeated James Wade in the opening match of the 2016 Darts Masters and now he is in front of his home crowd in Melbourne. Mathewson has been a consistent performer on the DPA tour all year and his clashes with Corey Cadby have produced outstanding darts so he is certainly up to the challenge.
For Peter Wright he is six from six in first round match ups in Australia. His toughest battle was probably his 6-4 win over Adam Rowe last year in Perth. Of course in Auckland this year he was knocked out in the first round by eventual runner up Corey Cadby so he will be looking to change that. Cadby’s good friend Mathewson, though, will be aiming to do an even better job on Wright. Peter Wright is facing the future of Australian darts twice in a week.

Match 4
Michael Smith v David Platt
Michael Smith is making his debut in the Australian versions of the Darts Masters against a veteran of the game in Australia. Platt will have been sitting back last week watching all the events in Auckland and been desperate to show his talent once more on the big stage.
Smith’s first round performance was comprehensive in Auckland, not conceding a leg, however his performance against Corey Cadby in the next round was very unconvincing. Platt, meanwhile, has not won a match in the World Series and will be looking to change that in Melbourne.

Match 5
Phil Taylor v Cody Harris
Whoever drew Taylor will be fearing the wrath of the 16 time World Champion after what happened in Auckland. Taylor is undefeated on the east coast of Australia, having won all four versions of the Sydney Darts Masters. He also won the first two Perth Darts Masters so he has had more success in Australia than New Zealand at the World Series.
Harris is looking to do a better job than his four previous first round losses in the World Series. He has certainly matched up well against Corey Cadby domestically in the past, so Cadby’s success against Taylor will only bring him more confidence.

Match 6
Raymond Van Barneveld v Corey Cadby
Barney lost in the very first World Series event to another Victorian in Tic Bridge. Now he gets the draw most of the professionals would be seeking to avoid. For Cadby he will look to take another big gun down to add to the likes of Taylor and Wright. However playing in front of a home crowd has its own pressures and it will be a new challenger for Cadby.
Cadby has won two first round clashes and lost one whilst van Barneveld, who has played in all the events in Australia and New Zealand has won six first round matches and lost three. He would have been happy to see the back of Sydney, having lost three from four in the opening round there but this draw will bring him little comfort in a new city.

Match 7
Gary Anderson v Justin Thompson
Having lost to Kyle Anderson in Auckland in the first round Gary Anderson will be looking to redress the situation against another Australian in Justin Thompson. The Scotsman has never lost in the first round of any of the Australian versions of the masters he has participated in.
Thompson debuts on the back of a very successful month in the Australian Championships for Darts Australia in Townsville and after this tournament will represent Australia in Tokyo. He has been in form across the year and will certainly be a challenge for Gary Anderson.

Match 8:
Simon Whitlock v Kyle Anderson
If their last match did not live up to the hype it was probably more to do with the desire not to lose than anything else. Whitlock will not have been happy to see Anderson and Cadby take the glory in Auckland and must be feeling some pressure to retain his position as number one Australian player. For Anderson, his back will have a target on it after winning Auckland. It will be hard playing a player who knows his game so well, especially a World Cup team mate who will be so motivated to win in Melbourne.
The head to head statistics now stand at three wins each on the big international stage, so both players can look at this as a chance to break the deadlock. For Whitlock it would be a statement that he is going nowhere as Australia’s number one, and for Anderson it would be a chance to build more evidence to the whisper that continues to grow louder that he is Australia’s new number one. Whatever the result, one thing for sure, the match will be fiercely competitive.