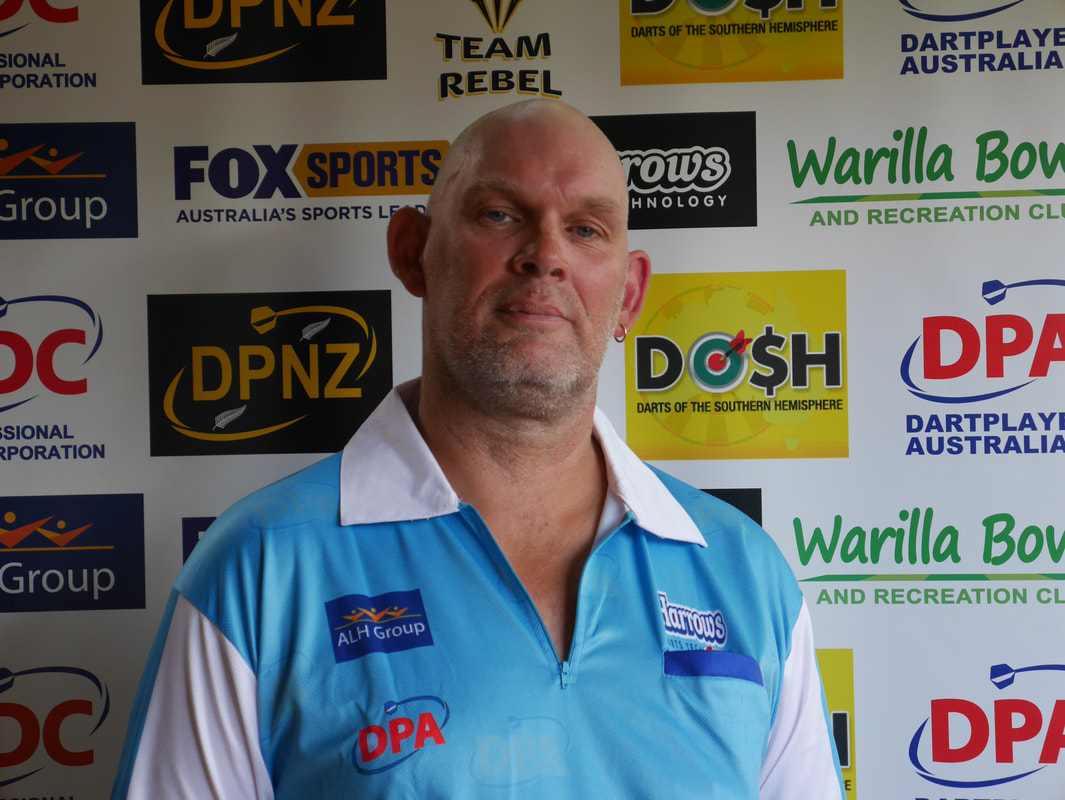 Brocky at the Oche

Who's the Boss – John Bunyard - The Guv'nor

The name of JB, the tough 49yo with a unique throwing style, is well known throughout darting circles in Australia but, surprisingly, not everyone puts the face to the name: “People come up to me from time to time and say they know my name, which is nice, but they didn't know it was me,” he said.

“Insofar as pressure goes, I don't really feel it and don't consider myself any better or worse than anyone else at the Oche. I just get up there and throw the best darts I can and if it's good enough I'll win and if not,” he shrugs before continuing.

“Like everyone, it depends on who you're playing on the day and we can all be as good or bad as everyone else.

“It's nice to be recognised occasionally but at the end of the day it's just about darts and not the name.”

A local Warilla (NSW) player on Monday nights and also  North Wollongong on Tuesday's in the Illawarra District Darts Association but readily admits to 'struggling' after the C-19 pandemic to get back into the swing of full on floor tournaments: “I'm struggling big time to be honest.

“I was playing alright before it hit and have done well in the on-line tournaments that have sprung up but it's not the same as coming back into a tournament proper and has been tough going, as it has for all the players.

“It's taking time in getting used to rolling the arm over, in cricket terms, for so many games on the same day and then to back it up the next.

“I've made the Q/F in one of the DPA NSW satellite tournaments so far and obviously I'm not happy about that but I'm working hard in practice to put it right and you know when you're having a good day or not.

“You can be playing brilliantly but it only takes one bad game and you're out of the tournament, that's the margins you're dealing with at this level amongst the best players in NSW.

“You aim for the final every time of course but sometimes it comes down to the luck of the draw and you could end up in the fabled 'group of death' with the random selection process but you put your head down and tackle each game as it come.

Talk of the World Series of Darts brings the inevitable reply: “Like everyone else, to win a spot on the WSD stage would be awesome, especially if it were for here in Wollongong.

“That would be a very proud moment for me and one I would certainly cherish and these tournaments throughout the year are the pathway to achieving that but it is a tough process with so many good players both here in Australia  and New Zealand.

“You need to be on top form throughout the day and the season but you never know, fingers crossed,” he adds with a smile.
When posed the question of Oceanic  or WSD, which would be the greater feat he adds: “Obviously since the inception of the WSD in 2013 here in Australia it's been every players dream to make the big stage and I'm no different.

“To win the Oceanic with so many previous greats on the roll of honour would be fantastic. It's the biggest tournament and title in the region but in light of present conditions I wouldn't want to be heading to the UK to play at the Ally Pally or whatever.

“I would love to win it and if the circumstances were different as in pre-Covid days, of course I would be proud to represent Australia  overseas but just at the moment I'm happy to be playing darts again, the rest will always take of itself.

“It's what we all want and if you don't have a goal to aim for you'll never achieve it.”

His early beginnings started in Melbourne before moving to the UK in a rare reversal, firstly to the county of Kent and Broadstairs in particular for a decade and latterly to Leicester in the midlands: “Yeah I know emigrating is usually the other way around but I lived in the UK for over 20-years before returning to Australia.

“It was a great experience though.”

An asphalter by trade, hard yakka to many, we often talk about dynasties in the sport and son Danny has started his darting journey:

“He has a long way to go but he's going in the right direction.

“He's starting to push players , not getting the wins at times but taking legs and giving it a good go.

“He has some way to go consistency wise but that will only come with regular play against the better players and his progress has been pleasing.”

JB is a knockabout character whose imposing look belies the ready wit and friendly demeanour.

After all, a massive West Ham fan, at the end of the day he will always be known as 'the Guv'nor.'